Four days after 26/11, what would an Indian citizen be feeling? What would an audience want to see and what could an artiste do?
It was this surging search for faith, answers, solutions and catharsis that was the prelude for the annual Delhi International Arts Festival in the capital in December 2008. A multi-venue, multi-activity event, it brought together a spectrum of performing arts, visual art exhibitions and film festivals, featuring stalwarts on one hand, and showcasing young talent in the youth festivals on the other hand, and ranging from folk forms to international collaborations. Festival director Pratibha Prahlad describes it as India’s ‘signature festival’ while Executive Director Arshiya Sethi contextualizes it as ‘India and the world and India in the world’.

The first day opened with a grand potpourri of the nine Indian classical dances featuring the veterans of each style—Shashadhar Acharya (Chhau), Pratibha Prahlad(Bharatanatyam), Ranjana Gauhar (Odissi), R.K. Singhajit Singh and Charu Sija Mathur (Manipuri), Jayarama Rao and Vanashree Rao (Kuchipudi), Jayaprabha Menon (Mohiniattam), Rajendra Gangani (Kathak), Sadanam Balakrishnan (Kathakali) and Sharoda Saikia (Sattriya). Weaving together the theme of ‘Devi’ and patriotism, while it was originally conceived to commemorate the 1857 revolt and 60 years of India’s independence, it became charged with another context in the wake of the Mumbai terror attacks. Art reflects our own perceptions, has the power to take on different meanings and a unique historical inter-textuality emerged as the dancers converged to the Vande Matram climax. There was hardly any dialogue between the forms, one following the other in linear conjunction and uniting only in the beginning and the end. The structure, format and theme were reminiscent of the ‘mile sur mera tumhara’ treatment. However, with the Mumbai trauma fresh in our minds, the spectacle of nine classical dance forms presented together, transcended from a cliche variety show to a moment of hope and togetherness. 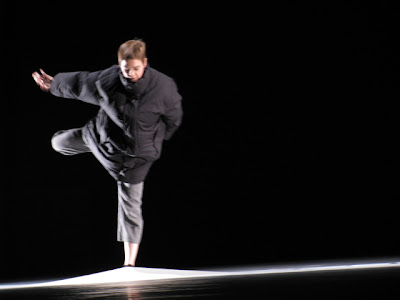 The second day opened at the other end of the spectrum. Swiss contemporary dancer and choreographer Anna Huber’s work ‘Stück mit Flügel’ delved into the realm of abstraction with the theme of travelling through time and experience, through emotional and physical spaces, alternating between destabilization and stillness, moving on and search for orientation. Rightfully called a ‘body investigator’ Huber eloquently uses the body, giving it multiple identities as an instrument, as a prop, as image, as concept. True to the theme, the choreography seamlessly balanced movement and stillness shaped by organic kinesthetic tension and a visual treat marked by the interaction between the lights, the space and the body, transforming into different shapes, sizes, designs, images and concepts. This was the first time Anna Huber was working with existing compositions and pianist Susanne Huber created mesmerizing sound chemistry with Anna’s movement vocabulary. The music was marked by strategic silences, alternating with compositions of Ligati, Liszt and Kurtag and dramatic electronic pieces by Martin Schutz. What was most striking was the fact that Susanna was not positioned just as an accompanying pianist, but as a body, a performer on stage. The silent, intermittent and dramatic gaze-dialogue between Anna and Susanna intensified the rhythmic geometry of music and movement. Anna’s virtuosity as a dancer was matched by her conceptual and choreographic integrity—she juxtaposed sophisticated movement with simple poses, primitive animal-like moves to Chaplin-like mannerisms, creating images of confrontation, longing, loss, acceptance and search. 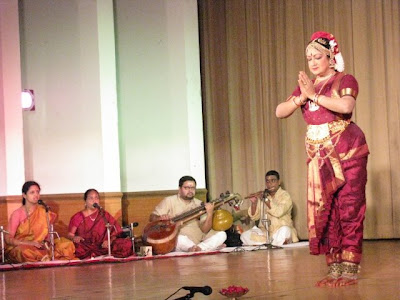 Another memorable performance was by the veteran dancer Dr. Padma Subrahmanyam. The Bharatanrityam exponent has a commanding stage presence and her riveting abhinaya transformed the evening into a moving experience. The performance began with a Pushpanjali where Dr. Subrahmanyam explored the grotesque with abandon and grace as she depicted Chamundi. The second piece was a Muthuswami Dikshitar krithi on Ardhanareeshwara. With the dramatic juxtaposition of masculine and feminine in abhinaya, the jatis were also choreographed to depict alternately, a flourish of feminine grace contrasted with virile movements. The dancer touched upon the nuances of the male-female constructs and with equal ease transformed into the devotee filled with wonder, awe and humility on seeing this divine play.
The Varnam was based on the Meera Bhajan ‘Pyaare darshan deejo’ and composed by Dr. Subrahmanyam in Ragam Abhogi. The jatis spelt out the fundamental distinguishing feature of the Bharatanrityam style with the sculptureque poses, variegated combination of the karanas, distinct waist and hip movements and a conspicuous gati-stithi alternation. With perfect coordination between the dancer and the accompanists, the music was deeply embedded with the choreography as each short repeated musical phrase responded to a crisp movement cadence. The highlight of the piece came when the dancer moved from the padarth to the samcari of ‘Meera daasi janam janam ki’. Here rhythmic intricacy and abhinaya nuances condensed to bring out the bhakti-sringara experience. The dancer enthralled with her portrayal of the nayika’s myriad moods—complaining, cajoling, arguing, rebuking and longing for her divine lover. While a dancer’s eyes are primarily the centre of expression, it was indeed a feat as Dr. Subrahmanyam kept the audience transfixed with the penultimate abhinaya sequence performed with closed eyes when the nayika dreams of divine union. The piece climaxed into an overwhelming moment of darshan. The performance concluded with the Annamacharya verse in Telugu set to an exuberant, folkish rhythm and laced with sublime humour and child-like innocence. 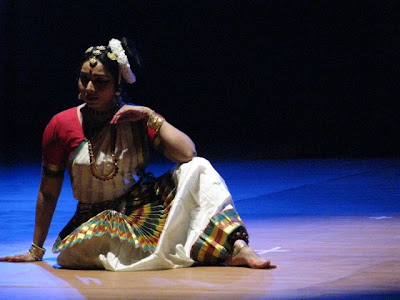 Gopika Varma excelled at the subtle grace in nritta, punctuated with angular glances and quivering eyebrows. However, her limited repertoire of expressions made the abhinaya repetitive and not intense enough. For instance, in the Swathi Thirunal keertanam ‘Paripalayamam’ the contrast and transformation from ‘Mohini’ to ‘Padmanabha’ was not heightened up. In the next Thirunal bhajan ‘Aaj aaye shyam mohan’ the long Pandakali (ball game) sequence could have been a more interesting choreographic exploration into rhythmic intricacies. 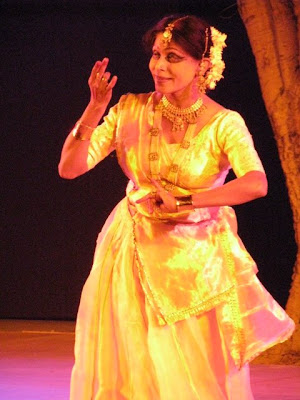 Shovana Narayan infused the evening with refreshing energy with her precise footwork and dynamic interaction with the audience. This exuberance was partly dampened by the uninspiring vocal accompaniment by Madhav Prasad. Apart from the traditional presentations, she presented two choreographic works situated within the context of contemporary dilemmas. ‘Ko hum’ poignantly depicted the multi-layered identities of the woman and a flight to freedom from domesticity and inner emotional bondage.
The second piece ‘Samvedna’ was dedicated to the Mumbai terror attack victims and re-contextualised Emperor Ashoka’s remorse after a blood-stained victory in the battlefield to the mindless killing of innocent people in the Mumbai attack.
Samvedna concluded in a standing ovation. Yes, Samvedna made us cry, it made us think…and the question of course still remains, of how art can intervene, activate change, or sublimate trauma, and how, as responsible, thinking citizens, artistes can be Artizens; or artisans of ideas that affect socio-political realities.▄
Posted by shrinkhla sahai at 3:09 PM 3 comments:

shrinkhla sahai
I am pursuing my Ph.D in Theatre and Performance Studies at Jawaharlal Nehru University, School of Arts and Aesthetics. My research interests are theatre, music, dance, radio and sound. I have been writing for national dailies and various magazines and journals. Bharatanatyam is my passion. I was associated with Radio Gandharv- 24 hour Hindustani Classical Music Station on Worldspace Satellite Radio. Presently working with Sahapedia-an online encyclopedia of Indian culture and heritage.